This is a membership challenge, for the first member who can prove they have caught a Blue, Porbeagle, Thresher and a Mako in British Waters.

The award (picture below), a Leaping Mako Tapestry, will be made at the relevant SACGB Annual Dinner. 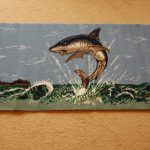 We appreciate that some of these fish may have been caught many years ago and may not have been released, but any sharks caught from now to enable the angler to achieve the four species, must be released.

The committee recognise that evidence may be difficult for previous captures, but any evidence submitted for previous and new captures must prove beyond all doubt that the shark was caught. The committee’s decision will be final.

These tapestries were also known as Dutfield Axminster Tapestries. They were donated to the club by Mr. Harry Dutfield and were awarded annually in recognition of specimen sharks.

Harry was part of the SACGB team which fished the New Zealand International Big Game Contest in 1968. He was an accomplished big game fisherman who was of the firm belief that Fiji provided the best big game fishing anywhere in the world.  At the time he was selected for the SACGB team his best catch was a 381lb Black Marlin (picture below) caught at Club de Pesca in Panama in 1966. He was also a well-known deep-sea sailing yachtsman and a member of the Bay of Islands Swordfish Club of New Zealand. 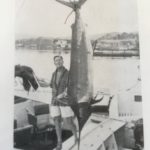 So that’s the history, its over to you now ….. good hunting and tight lines