When the Shark Angling Club of Great Britain announced the Leaping Mako Tapestry Challenge earlier this year, the committee were aware that a small number of active members were already one species away from meeting the challenge.  This small group comprised Andy Griffith, Dave Turner and Chris Bett.  There was of course was no guarantee that one of these members would win, but statistically they had a better chance than most of us.

Andy and Dave needed a Thresher and Chris, needing a Mako faced the biggest task.

The Leaping Mako Tapestry, originally known as the Dutfield Axminster Tapestries were donated to the club many years ago by Mr. Harry Dutfield and in previous years, were awarded annually in recognition of specimen sharks.

A sign on Harrys desk summed up his philosophy: “Work is for people who don’t know how to fish.”   Truly a man of vision and a fitting donor to reward the first angler to catch and release what has become known as “The Big Four”.

We didn’t have long to wait and with the festival only a week old we received news of a potential winner.  An excited Andy Griffith contacted us to say he had caught and released a Thresher which completed his four species quest.

The middle of July appears to be when the planets align for Andy as five years earlier, almost to the day he achieved another first when he caught and released a Blue, a Porbeagle and a Short Fin Mako on the same day.

True to form Andy met this challenge in spectacular fashion by catching and releasing not one, but five Threshers over his three-day trip at an undisclosed location.  Three of the fish, 200lbs, 160lbs and 150lbs were visually estimated. The other two, estimated at 40lbs and 30lbs were boarded then released.

The 150lbs Thresher provided what could well be the photographic sequence of the year in the UK as it was captured via the skipper’s camera head set jumping clear of the water. 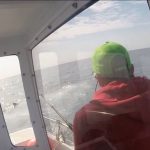 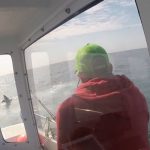 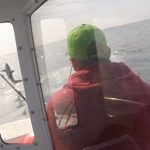 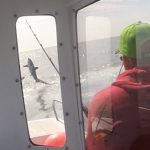 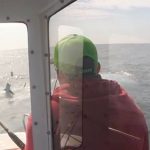 The SACGB will recognise Andy’s achievement by awarding him with a Leaping Mako Tapestry at our Annual Trophy Presentation evening in October. The IGFA have also confirmed they will be recognising Andy’s Big Four Challenge later in the year, and the Dutch sporting magazine, Zeehengelsport, are covering Andy’s Big Four Challenge and his Seven Species over 100lbs achievement in their November edition.

When we covered Andy’s Mako, Porbeagle and Blue result we asked, “How can you top that” and replied by saying, “perhaps never”.

We will leave it to you to decide how to rank Andy’s many firsts and achievements and to decide how, or if, he can top it.

From Andy’s perspective he will continue with his current strategy which is, “put yourself in the best locations with the best skippers and just go fishing, you never know what might turn up”

Congratulations once again from the SACGB Andy …. Well done