Awarded annually for the heaviest shark of the season caught by a Member outside British Waters.

At the 26th July 1966 Committee meeting the T N Foster challenge text was altered to read, “Heaviest Shark caught anywhere outside the coastal waters of Britain by a member living in or outside Great Britain, All claims to be made on the Clubs Declaration Forms with the signatures of responsible witnesses”.

The trophy was modified in 2017 by a Looe carpenter to create space for additional winners. 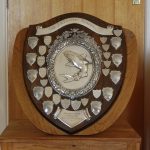