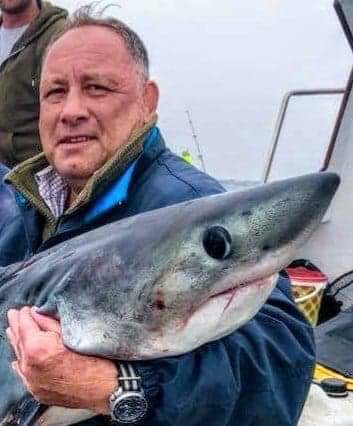 From an early age I was interested in fishing and joined the school fishing club. We fished from Rame Head, Tubby’s Head and Falmouth Pier.  After school, my father, who was also a keen sea angler bought a small boat and we ventured out of Falmouth Bay to catch Mackerel, Wrasse and Pollock. I also remember catching Red Bream off the Manacles and a John Dory off Coverack.

My interest in shark fishing first started when I went a birthday trip on a boat called Monkswood skippered by Frank Vinnacombe. Whist I did not catch anything, we did hook up and the sound of the line leaving the reel at speed, got me hooked.

My first shark catch was on Leo 2 from Falmouth some 30 years ago.  I have also fished for sharks from, Blue Pointer from Helford, Anglo Dawn from Falmouth and Anquilla from Mevagissey.

I never thought about joining the club until recently when I caught a blue and a fellow angler suggested that I should join. We however had no tape measure and only managed to take a picture on a phone. Since joining as an associate member, last year, I have not caught a qualifying fish. My aim therefore is to become a full member.

My aims and objectives are: