Hamish opened the newsletter by observing that members had appreciated the pictures in his last newsletter so he included ones of the Clubs tophies (pictured below), the weighing site, the Clubs HQ (The Jolly Sailor) which he says was an extremely convenient for himself, if nobody else, and the Shark Bar at the Hannafore Point Hotel which was essentially the Clubs Social Headquarters.

The Shark Bar was open to members and guests every Wednesday evening between June 7th to September 27th from 9pm. 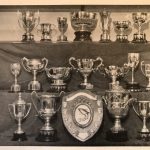 The Torrey Canyon oil disaster was on members minds when they were thinking of fishing along the South Coast. Hamish was writing this newsletter on the 24th May 1967 and at that time he could report that so far “no oil has ever been seen or smelt anywhere along the South Coast east of the Lizard” In his view it was extremely unlikely to come along this way now.

He continues to say that even in Penzance the situation was not as bad as the the Press were reporting. The press coverage including that from the local TV station (Westward TV) was indicating that Cornwall was “drowning in the stuff”

He then printed a letter from Fred Williams, one of the Penzance shark skippers:

Regarding the oil pollution, there is very little oil in the Bay, and as there are good catches of pilchards and mackerel there seems no reason why we should not catch sharks when the season commences.

The oil and detergent only seem to be affecting the shore fishing as the boats seem to be catching plenty of pollack in deeper water.

I am sorry to say my bookings have come to a sudden halt due to the oil scare, but we are hoping that they will pick up when anglers realise the position is not as black as published by the press.

Hamish supports this view by confirming that all the beaches and rocks on the South Coast were beautifully clean and that the fishing boats had been bringing in above average catches of mackerel and other fish.

He concludes that on that basis, “the secretary does not propose to cover himself in sackcloth and ashes, or fly the President at half-mast”

The addition of two emblems to the range were reported. The first one was a 1 pint pewter tankard with the a glass bottom on which a shark was engraved. A Club burgee was mounted on the side of the tankard. Underneath the burgee the Shark Angling Club of Great Britain was engraved and underneath that the members name was engraved. It cost 75 shillings.

The second one was described as “a delightful little key ring” suitable for car ignition keys or a ladies handbag. Attached to the keyring by a small chain was the Club burgee. It was enclosed in a thick clear plastic moulding. It cost 15 shillings

The Weighing Site and the Headquarters

The picture on the left is the weighing complete with the caravan where the Secretary and others filled themselves up with tea. Weighing times were between 5 and 7pm.  The picture on the right  is the Jolly Sailor, West Looe, the Clubs Headquarters (1st Floor, entrance at opposite end) where acknowledges that he and others fill themselves up with more “rewarding liquids”. Office hours were 9am to 12 noon, except Sundays. 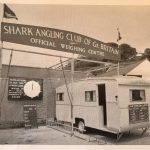 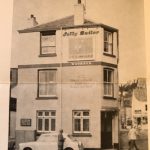 His last newsletter had promoted some feedback from Mr T N Foster whose business took him all over the globe which provided him with access to some of the Worlds best big game fishing and also from Mr J J Holmes.

He printed some extracts from these letters:

First from Mr T N Foster – My business interests extend across the Pacific and I am sent – very willingly – to Honolulu occasionally. The fishing from Hawaii Island itself is absolutely fantastic. Apart from the famed Blue Marlin, even the little Mahi Mahi jump and fight like possessed devils.

When returning from the Pacific I have stopped off for a days fishing in all sorts of places from Wedgeport, Nova Scotia to various places in the Caribbean and Bermuda (the latter is much over-rated and at $75 a day, never again. Even the Hawaiian charter only, runs at £100 a day).

I have often vaguely thought of trying to win my own shield (the T N Foster Trophy) but Pacific game skippers would certainly regard shark fishing as heresy and nobody would really want to fish for sharks in those waters. Even in the Caribbean sharks are regarded as a nuisance.

This technique is an interesting form of dead bait trolled at 2/3 knots. The interesting thing about the bait is that it “swims” exactly like a real fish. For the bait you need, say, an 18” length of 3/8” copper tube sharpened to a knife edge at one end and a cork at the other end. You open the mackerels mouth and feel for the top of the backbone with the sharp end of the tube then press home all the way down the backbone to the tail. Put in the cork at the other end, give it a twist, and withdraw it, removing the whole backbone. Two small slits in the belly to remove guts and insert the leader into a slit and up through the mouth so that the hook hangs down just below the fish. Tie up the mouth and you will find that this fish swims exactly like a real mackerel.

The bait is attached to one of the two poles lashed to the boat.

From the pole on the other side of the boat a second rod and line has a teaser bait of, say, six mackerel tied nearly nose to tail along the trace. The principle here is that the teaser bait looks like a school of mackerel playing on the surface and draws the Tunny up out of the deep so that he can see the real bait. He dashes at it and hooks himself.

If you are not familiar with big game trolling methods, I take it you have understood my reference to poles. Where these are not proper poles forming part of a big game boat, one can use ordinary pieces of 2” * 2” softwood of about 12 to 14 feet long. In Ireland I just lash one each to the port and starboard sides. You must also have some form of quick release where the line with the teaser bait and the other line with the killer bait are “attached” to the top of the poles. There are special sorts of clips for this, strong enough to take the drag of the boat but releasing automatically when a bait is taken. Alternatively, you can use thick cotton or string for the same object.

I think this method could possibly be used successfully off Looe for Mako shark and you might increase the catch of this species if any of the regular local men are willing to spare a number of days trying it out.

Incidentally, I doubt very much whether a drift speed would ever be fast enough to work this sort of bait properly. The bait should be trolled at 2/3 knots.

Mr J J Holmes letter was next. He had been fishing in the Canary Islands in the yacht, “Xiphias” which he was both owner and captain of. The period discussed covers from September 29th to November 16th, 1966.

During this period the “Xiphias” made 18 trips. 14 Blue Sharks were hooked, of these 9 were landed and 5 broke away. The largest was 341.5lbs. This fish has been submitted to the International Game Fishing Association for a World Record, being 7.5lbs over the existing World Record when using 130lbs breaking strain line. The average size of the Blue Shark in these waters is in the region of 250lbs and it is felt that one of 500lbs will be caught before long. The 341.5lbs Blue Shark caused considerable interest in the local press and it is felt that if after only 18 trips from one boat a world record fish can be taken in the Canaries, there is reason to believe that several other world records will be taken in these waters.

From the small amount if knowledge learnt in this short period it is felt that many overseas anglers could be attracted to the Canaries to catch Blue Shark during the winter months when operating from Las Palmas is possible.

This shark was subsequently registered with the IGFA as a World Record and a good account of its capture was published in the March edition of “Creel”.

It was reported that a new Shark Club had been formed at Falmouth and they had applied for affiliation to the SACGB which had been granted. The Falmouth Clubs headquarters were at the Norway Inn at Perranworthal. The Chairman was Major G Hick, T. D., R.E. (Retd), Hon Secretary was Mr R Harding and the Hon Treasurer was Mr R Fiddick.

The Falmouth Club had two weigh centres, one at the Prince of Wales Pier with Mr A B Harvey as weighmaster and the other at the Town Quay with Mr W F Berks as weighmaster.

The pictures below are of the Shark Bar, at the Hannafore Point Hotel where, says Hamish,  on Wednesday evenings, the Secretary and others continue to fill themselves up wit “rewarding liquids”. On the walls there were photographs of record sharks and the Honours Board of the Clubs Officers and of notable sharks caught over the years from 1953.  Hamish goes on to say that sadly the club are not credited with the revenue from the “one armed bandit” which you can see on the right side of one of the pictures. 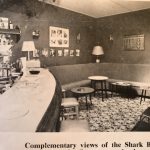 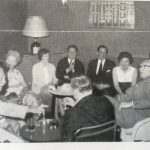 The picture (above centre) of the gathering in the Shark Bar was described by Hamish as a “moment of high drama”. It shows Hamish (the one in glasses and filled to repletion with rewarding liquids .. once again) recoiling in shock admiration as the President  who is pointing his finger to emphasize his fishing story. The blonde lady next but one to the President, is his wife who had obviously heard the story before. The lady smiling and leaning forward obviously hasn’t. Sitting beside her is her husband the Chairman, Rex Barnes, desperately thinking up a story to cap the Presidents.