In his introduction he notes that judging by the number of letters he is receiving there is a growing interest in Shark Fishing across the country and especially amongst the younger generation.

A “Grand Draw” had been introduced which allowed members to purchase tickets throughout the year with the draw taking place at the Annual Dinner. This was a club fund raiser but also enabled a donation to be made to the RNLI.

Tagging – a visitor from Sweden had written to the club to report that a Blue he had caught and tagged out of Las Palmas, Canary Islands, in February 1970 had been caught by a Spanish longliner 30miles SW of Mazaghan, Morocco. This was a distance of 44 miles NE of where it had been tagged 604 days prior. Its estimated weight was 200lbs.

Record Lists – the Chairman of the Records Committee was Peter Maddock who was later to become a President of the SACGB. Its reported that he had brought the records up to date and also added a 6lbs breaking strain line class to remain in line with the IGFA. This was effective from 1st March 1972

Shark Returns – a request was made for other ports to make their shark returns in time but in the annual report the club were only able to show Looe figures due to the lack of information from other ports.

Pennant Code – members were reminded of the pennant code which was coming into force on the 1st May 1972.

Emblems – New stock had been received: Wall shields were £2.50, Anorak badges were 50p and Cravats (all over shark design) were £2 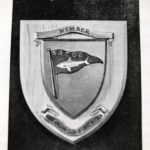 Headquarters – building work had started towards the end of the previous year to add a floor which was to be occupied by the Harbour Master and staff. This was continuing, and the club were hoping all would be complete before the start of the season. Brian announced previously his intention to visit all the sharking sites but due to unforeseen circumstances had not been able to do so. He still planned to do this.

Old Headquarters – the previous headquarters had been at the Jolly Sailor in West Looe. Much loved by Hamish Rogerson due to the ease with which he could obtain his gin and tonic. The landlords Mr & Mrs McVeigh were now leaving the pub so it was the end of an era.

Mateus Rose – Brian reported that Bill Matty was selling his power yacht, the Mateus Rose and he earnestly hoped the new owner would keep her in Looe

Annual Report 1971 – its noted once again that a larger number of small sharks were in the Channel of the SE Coast than in 1970. Threshers were once again conspicuous by their absence and they hoped that at least one would be caught in the coming season.

Sharking Knot – The Vice President, “Dusty Miller”, had forwarded an alternative knot to the “Hangmans Knot”.  The hangmans knot was unsuitable when making up a doubled line so this one was recommended.