Hamish Rogerson was still the secretary and he started the March newsletter in his inimitable style. The introductory paragraph went like this:

At the time of writing we are in the midst of all the gloom of strikes, rising prices and general bloody-mindedness. Then what can I tell you that might smooth the wrinkles on your furrowed brow?

Yet in spite of it all it is still good to be alive, to look forward to meeting some of you again during the coming season and to hear your eternal optimism of “just going out to catch that big one”.  Indeed, the wheel of fortune may turn again and provide a record year for big sharks. You might even win the new Bacardi Contest and that would be something.

So, having got ourselves into a better frame of mind let us proceed to business.

(I, the current secretary (Scottish John) would liked to have met this gentleman … he sounds a real character)

New Bacardi Rum Contest – the Bacardi Rum company had again offered to provide cash prizes for the heaviest shark caught between 1st June to 30th September. The first prize was matched £1 for 1lb of shark for the angler with the skipper being awarded £50.

The secondary prizes were changed to £50 for the best shark of each of the four months from June to September.

The definition of “best was (and still is, today, 2018) one whose weight as a percentage of the British record for the same specie.

Entry forms for the competition were distributed across sharking centres and tackle shops. They could of course be obtained direct from Hamish.

All entries had to be accompanied with a photograph (preferably taken professionally). They also had to include the Bacardi Spice Rum notice board with the shark details chalked on it.

Selachians Extraordinary – Two unusual species had been caught.   The first was a Spiney Shark which normally inhabits depths of up to 500 fathoms.  This one had got lost as it had been caught in a net off Polperro. The last time one of these had been reported caught of British shores was 36 years ago. It is a murderous looking fish with curved steel-hard thorns 3/4inch long all over its body. If it brushed against you it would cause serious injury. Its teeth form a dazzling white unbroken curve like a bent razor blade and just as sharp while its flesh is like thick white jelly. Altogether an unpleasant shark. 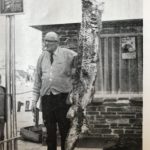 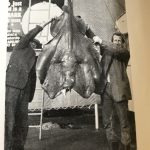 The other was an Electric Ray which had been caught off Looe.  The electric shock-producing organs are two small rounded humps, one on each side of the white underside of its guitar shaped body. Each hump contains 375 separate minute electric batteries which can provide as much as 220 volts and can momentarily light up a household lamp. The Ray kills its prey by stunning it then retiring to the sea bed to rest and recharge its batteries.  The electric shock is strong enough to knock a fisherman right across his boat.

A Pioneer retires – Hamish reports that sadly, Edgar Williams had sold his boat, the Silver Spray which had gone to St. Ives and that he has retired from sharking. Edgar had bought a 19 footer to go bottom fishing instead.

Edgar was the first skipper in Looe to take a customer out sharking and that was in 1946. Although the Mr. F Lyde Caunter had been catching sharks from his own boat during the war.

Edgar used to take his customers out once or twice a week over the whiting grounds and anchor, putting out a shark line over the stern. Using these tactics two or three sharks at the most could be caught. 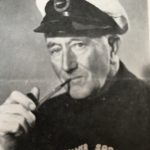 On one occasion he had taken out Dr. N S Lorraine but had difficulty in getting the anchor to hold. “Lets try drifting”, said Edgar and that day they caught 11 sharks. This was the first time drifting for sharks was tried, a practise that proved very successful and gave the sport a tremendous boost.

Seven years after Edgar’s first sharking trip the SACGB was formed and he became a Founder Member and its first Treasurer.

Hamish finished the article by on behalf of the club, to wish Edgar and his charming wife Dot, whom he points out that nobody could mistake for being any other than a Londoner, many happy years in retirement.

Annual Report 1971 – more Blue sharks were caught in 1970 than in the previous six years but the number of over 75lbs had dropped significantly and was the lowest figure (197) for the past ten years.

As you would expect there were many theories as to why this was the case but the one considered most plausible was that if there are big sharks about then the smaller sharks congregate is safer areas. If this was true then the South West coast must have been one of them.

Another belief was that many shark anglers believed the skippers went out too far as in the earlier years of the club large sharks were caught in greater numbers nearer the shore.

Hamish noted that it would be a courageous skipper who would ignore standard practise and change tactics for fear of his anglers pointing to this as the reason for low catches.

The club had kept statistics over the years but they were unable to provide any clue to the reason why in 1970 there was an abundance of small sharks and very few larger ones.

The conclusion was that this had happened before and corrected itself so this would happen again, “as after all little sharks grow up to be big ones”

Pat Smiths 369lbs Porbeagle caught off Looe was the best of the specie caught during the year under review.

Mako’s and Threshers were scarce, the best being a 370lb Mako caught off Falmouth by Phil Taylor and a 201lbs Thresher caught off Isle of Wight by Stan Dulley.

Financial position – The club audited accounts were given in this newsletter and it reported a loss of £200 for the year. The reason given was the large reduction in qualifying sharks.

This meant a reduction in new memberships, merchandise and shark weighing receipts. To cover the loss and the cost of the merchandise stock the club withdrew £300 from their investment account.

The previous year the club had made only a £4 profit.

With the economic outlook looking gloomy the committee were very concerned to avoid a repetition in the coming year. Memberships had been raised to £1 -1 -0 the previous year but increasing these further but the additional revenue from this would not be sufficient to meet the rapidly increasing costs of the club. The article finishes by saying the committee were considering some “drastic” measures.