The headquarters address was The Quay, East Looe and the secretary was Hamish Rogerson.

Hamish was clearly a creative chap as the newsletter starts with a poem which he was inspired to write while sat at his desk in the new headquarters with the sun streaming through his window. Here is the poem,

O the harbour at Looe

Is a beautiful spot.

There’s not much to dooe

Except sail a yot.

Or fish over wrecks,

Ara mark, or a buoy,

Or sail with Jack Horrecks

Or – with pilchard as bait-

Catch a shark and have fun.

You’ll swear blind that its wait#

So Hooray!  Lucky Me!

I could never feel blue

When I walk on the Qe

Round the harbour at Llue.

For this odd kind of rhyme.

He did it much bebtor –

I haven’t the thyme.

“Q”, was the pen name used by the late Sir Arthur Quiller-Couch, author, who wrote verses like these. His father, Dr. Jonathon Couch, lived in Polperro, was a well known Cornish historian and an authority on sea fishes including sharks.

Another World Record – Hamish begins this article by musing why women big game anglers are “nearly” always dishy and how fortunate he is to be the Hon. Secretary with so many women anglers in the club ….. not sure those comments would be allowable today, but I am sure in his own way, he genuinely meant it as a complement to all women anglers.

Paula says she began to get interested in shark angling when three of the club members fished with Dutton (her husband) off St Catherines Point, Isle of Wight and returned with 10 Porbeagles.  Not long after that the Mark Twain (their boat) was taken out of the water for its annual refit. As the refit was completed ahead of schedule her husband suggested they take a trip to Littlehampton and have a go at sharking.  In preparation for the trip she went into the village and purchased some wire, large hooks and swivels and made some shark traces

At 5.30am on the 14th August 1969, Paula her husband and two others boarded the Mark Twain and set a course for St Catherines Point. The ruby dubby was prepared and they started their first drift at 9.30am.  Shortly after they spotted a dorsal fin circling the boat, then suddenly it came on the starboard side and attacked the ruby dubby bags.  They adjusted the depths of their baits and almost immediately there was a run on Paulas rod.  She hooked the fish and brought it to the boat. It was estimated to be 80lbs and her husband took the decision to return the shark. Which disappointed her a little as she had never caught such a large fish. Her best previous to this was a 54lbs Tope.

Approximately an hour later she had another run. She recalls this was “different” from the last one as the shark went off at a “tremendous speed”. Having only 300 yards on her reel she couldn’t let it run too far and successfully turned it and it headed towards the bow of the boat. She manoeuvred herself over the forestay, the side-stays and the after-stays and was coming to the starboard side when the shark surfaced 150 yards from the boat.

Her husband advised her to keep it circling the boat as she had such a small amount of line on her reel. She gained some line then the shark decided to circle the boat again. This time she staggered over the stays, her arms feeling that they would drop off.

She kept recovering line and eventually the shark came to the starboard side of the boat. It took Dutton and the two other men on the boat to secure the shark using a Hardy releasing gaff and two small hand gaffs and eventually they brought it onto the deck. At that point Paula remembers collapsing in a heap on the deck, totally exhausted.

They carried on fishing and had another two runs but on both occasions the sharks dropped the bait so they returned home.

And the rest as they say is history. The picture below shows Paula and her shark ….  222.5 lbs and caught on 30lbs line. 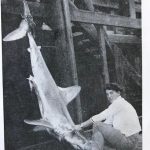 World Record Tables – Hamish recalls reporting in 1968 that it was 10 years since a British angler had been awarded a world record and now he was able to report that the club held 5 world records.

Mr Desmond Bourgourd with a 430lbs Porbeagle on 80lbs line

He advises anglers to ensure they stick to the IGFA rules as one of Trevor Prices claims was turned down as his rod was a few inches short.

A Battle with 220lbs of Terror – Hamish reports that he received a letter form Richard Spraggs (an 18 year old student) and his fishing pal Terry Sears. He says, “seldom in the experience of the Club has such an application for membership been received”. The lads are pictured below. On the left is Richard Spraggs and on the right is Terry Sears.

I have been engaged in some shark fishing in the Nab Tower area off the Isle of Wight. I had never ever seen a shark until our first catch on the 14th June this year. Since then, I and my friend have had 14 sharks:-

All these fish have been witnessed. Please tell me if we can join the Club

The lads became members and brought pictures and articles written by a local journalist to the Annual Dinner.

Hamish found the articles inspiring and shared some of the sentences from the articles which are given below:

“A glass fibre rod bowed and 100 yards of the finest terylene line flew out of sight as the reel spun like a Catherine wheel….”

“Harness!, roared the teenager as beads of sweat formed on his forehead – and his companion scrambled across the varnished deck”

“An hour later the battle was won. In the shadow of the Isle of Wight, man had triumphed over the Deadly Prince of the Sea”

This text really impressed Hamish and he mused that he really must pull his socks up ….

Obituaries – Two of the founder members of the club passed away.  Dr. Norman Lorraine died peacefully in his sleep at home during the night of the 31st December at the age of 77. He had fished the Cornish seas for over 40 years, originally as a child on holiday then later in his retirement. He was one of the founder members of the SACGB and served on the Committee. He was also appointed as honorary biologist for the club and performed a number of notable post-mortem dissections on sharks, which were the first of their kind, and which created considerable interest in the UK and the USA.

T Sercombe Oliver died at the age of 70 on the 18th January, also after a long illness. He had been retired for eight years and lived in a cottage at Crafthole, near Torpoint. For the previous 20 years he had spent his holidays with his wife, son and daughter at Downderry. He was a keen angler and spent as much time as he could fishing with friends and family on his boat, “Phyrijen”. He served on the committee continuously from 1953 to 1963 when he resigned owing to ill health.

Annual Report – The south west ports monopoly on shark numbers reduced during 1969 while at the eastern end of the Channel more and larger Porbeagle sharks were being caught.  As the eastern end was producing Porbeagle of 100lbs up to the world record shark of 430lbs, the western end was experiencing its worst season for Blues over 100lbs.

This had happened before in 1955 and 1956 when most of the sharks caught (approx. 3500 per year) were small, not more than 4 feet in length. In the following years the bigger Blues returned. In 1960 and 1961 a remarkable total of 6000 Blues were caught each year but again the majority were very small.