Karan opened this newsletter by wishing everyone the best for the new season and pointing out that the Clubhouse had been refurbished during the winter.

Mike Millman, a professional angling journalist, had joined the committee and was looking forward to helping the club continue to grow. He contributed the article at the end of this newsletter.

This second festival sponsored by Jack Daniels was announced but due to the popularity of the previous year, this time entrance was restricted to members only. The entry cost for the two day event was £55

The President, Mr Kingerlee opened the meeting, commenting on what a terrific year the club had experienced and the difference in atmosphere amongst its members.

The club were able to confirm two further years of Jack Daniels sponsorship and it was hoped that this year a tagging programme could be set up.

The Chariman commented that he was pleased at the level of attendance at the AGM and also alluded to the good atmosphere. He praised Mr. P Catnach for his work in the Caunter Room and as Treasurer.

The club had held its first shark anglinh festival and it had been a great success. It was hoped another could be held the following year

Mr K Levitt, a committee member and weighmaster commented on the good season enjoyed at Looe when 385 sharks had been caught and 304 had been released. The quality was also good with 33 being of 100lbs and above.

Accounts were not so good, attributed mainly to staff problems.

Although, in his book “British Saltwater Fish” published in 1904 the then noted authority F G Afalo mentions many small Porbeagles being killed on pollack grounds off Cornwall, the true history of rod and line fishing for this species of shark in English waters goes back less than forty years.

Up to 1957 only a few of no great size had been taken but in August of that year the late Mrs Hetty Eathorne who, with her husband Jack, was a founder member of the SACGB set a new British and World standard with a specimen of 271lbs, hooked off Looe.

It was taken from “Little One” skippered by Bill Butters and there was great excitement on the quay when the fish was brought ashore. It improved on the existing world record set off South Africa in 1949 by just 11lbs. Hetty’s fish was beaten three years later by a giant of 366lbs which was caught off the East coast of the United States. At roughly the same time a porbeagle just one pound bigger was taken off Jersey, but a record claim could not be made as the capture did not follow IGFA rules to the letter.

A fish of 352lbs caught by Mrs Eathorne off Looe in 1955 had been claimed as a World Record Porbeagle, but in January 1956 it was positively identified as a Mako. It was accorded the opening British Record for this species.

In June 1970 the World Record returned to Britain and Looe when Pat Smith brought a porbeagle of 369lbs to gaff. A year later Dennis Bougourd of Guernsey pushed the standard to 430lbs. At the time this was considered extreme for the species. Between these record captures the waters around the Isle of Wight became a mecca for porbeagle hunters, among outstanding fish were heavyweights of 324, 306, 399, 286 and 278lbs. It should be noted that a few pioneering anglers, mostly fishing off Achill Island, Ireland had as far back as 1928 taken much heavier porbeagles without it seems the ambition to see them officially listed. The most successful angler was Dr. O D Browne who boated fish weighing between 300 and 365lbs during the years 1928/1934.

Other great shark from Achill area scaled in at 340 and 336lbs. Due to the war the Irish shark fishing fell into the doldrums until 1960 when Mrs. P Sweener beat a porbeagle of 262lbs in Keem Bay, Achill.

In the 1970’s the Irish Fisheries Trust carried out an extensive tagging operation with a number of large fish so marked, but only one was subsequently recaptured off Cape Finisterre, France.

In 1974 the centre of porbeagle sharking activity moved from the Isle of Wight to the North coast of Cornwall and Devon, where large numbers of fish in the 200 to 350lbs class provided rod bending excitement. Most were caught close to shore, many being played within a few hundred yards of the vaulting cliffs at Crackington Haven at times with less than eighty feet of water under the boats keel.

1976 was a memorable year of massive porbeagles – both caught and lost. Jorge Potier of London set a new World Record with a fish of 465lbs on 130lbs class tackle off Crackington. The battle lasted one and a half hours, and several times it was touch and go when the fish moved to the bottom among jagged rocks.

I vividly recall the weighing of this giant on headquarters scales. Due to the inadequate equipment at Padstow the fish was brought to Looe, believe it or not, in an almost new station wagon, the inside of which must have needed a re-trim.

Marine Biologists were of the opinion that this shark which had a length in excess of ten feet and a girth of four and a half, was the ultimate for the species (shades of 1971) but this was revised quickly as a month later a porbeagle reliably estimated to be in the 600lbs class was lost at gaff after a prolonged struggle in the Crackington area, which by now was getting publicity world-wide.

But for a twenty-four-hour delay in weighing, the World Record would have passed to Cornish angler, Derek Runnals in 1977. His fish weighed 458lbs and between gaffing and the official scales which had to be transported up from Looe to Padstow, the weight loss was easily 30lbs. Derek did have the consolation of being awarded the IGFA World Line Class Record in the Mens 37kg category. I had the pleasure of photographing and reporting both these great catches.

Following a flurry of big fish in the next two years which included a 450 pounder by Rick Cotterell, sadly the number of porbeagles in British Waters clearly declined, possibly due to volume of fish taken in the het-day years.

Regrettably, conservation has gone out of the window as the porbeagle fetches high money on the quayside, which has led to virtually all fish being kept. Unless this situation is redressed and quickly, this great sporting fish has a very poor future. 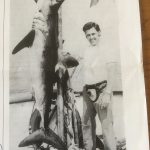 The picture is off Mike Millman with a 252lbs Porbeagle he caught off Crackington. An hour later he took another of nearly 200lbs