The political and economic situation in the country continued to be difficult but luckily the sharking news was brighter. The indications were that this year there would be an increase in heavier sharks although perhaps overall the number would be less.

The bad weather in May, June and July had hit the sharking boats hard but in spite of this there had been some good sharks caught which had benefitted new membership.

Sadly Pat Case had passed away. Pat was a previous secretary of the SACGB.

Nora, who was Brians secretary had been in an accident and she was wished a speedy recovery.

Jack Butters, skipper of “Paula” was reported as very ill and still in hospital

Emblems: Once again the prices of emblems had to be increased. However, two additional emblems had been added to the portfolio. They were blazer buttons which were engraved with the club burgee and cuff links which featured these new buttons. 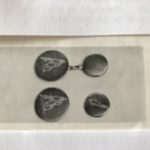 Another was a wall mounted shark facsimile, called “Trophysh” complete with the SACGB badge. The Blue shark version cost £6.50 and the Porbeagle one cost £7.50 ….. not sure why that was? 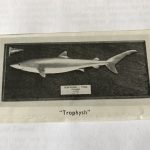 British Records Sub Committee – the Chairman of this committee was now Jack Brown.

Boat contact list – the following were added to the boat list, Cruising South West at Dartmouth, I Harris and G Tupper at Exmouth and M James of Weymouth

Shark Bar – there had been a previous decision to open the Shark Bar one hour earlier to 8pm. However it had become apparent that 8pm was too early for members as they had to get their dinner before coming to the bar ……  There must have been a number of requests to open later as the note ends by saying, “It is regretted that the closing time of 11 o’clock cannot be extended; the laws of the land will not permit any relaxation.”

Tagging – John Stevens reported on the tagging programme and confirmed that 60 Blues had been tagged in June. One tagged  Blue shark had been captured in the Canary Isles on the 6th December 1973, having travelled 1250 mile sin 162 days.  Another tagged on 22nd August 1973 off Sagres, Portugal had been recaptured 12th May 1974, 100 miles north of Sagres. This shark had travelled 100 miles in 262 days and had increased in weight by approx. 6lbs.

A Good Blue – a Blue shark of 150lbs had been caught of Looe on the 30th July by Mr G. Francis aboard the Carol Ann, skippered by P Dingle.

British Shark Records Committee – The meeting was held on the 25th May 1974 at the Hannafore Point Hotel. J Brown who was now the Chairman of this committee reported that the number of claims had been very low, and he hoped this would improve.

Annual General Meeting – The Chairman Mr. E. T. Barnes reported that the winter had been uneventful. He confirmed that Bacardi had withdrawn their sponsorship but that the Ckub had two other projects in hand for the next season.

The withdrawal of Bacardi sponsorship and the economic and political climate was obviously creating uncertainty and rumour as he commented on the rumour of there being fewer sharking boats was unfounded as there were 21 boats going our from Looe this season.

He said he had recently read a book which stated that in 1956 sharks were small, but from then on the size had increased and he hoped this would be the case on 1974.

He ended by informing the meeting that he would not be standing for Chairman this year and thanked the members of the committee for the help and support they had given to him.

Accounts – Mr P. O’Kane said that he was worried about the position of the Clubs finances although income had kept pace during the year with regular subscriptions and Life Membership payments. He said that the club needed other ways of augmenting its income and that may members were interested in having their own Clubhouse. The secretary was in agreement with this view.  An application had been made by the club to the Sports Council but this had been turned down on the grounds that the Club required the grant purely for social and not sporting reasons.

Several small properties had been viewed but the costs were found to be prohibitive. There had been a suggestion that a consortium of the Clubs wealthier members could assist but this was fraught with difficulties and had been rejected.

Mr Bowning suggested a possible sharing arrangement with the new premises the Sailing Club had acquired. The secretary advised this had been considered but couldn’t proceed because of the clubs ineligibility for a grant.  Mr P O’Kane suggested the sailing clubs old premises as an option but it was a matter of cost. Mr G Kingerlee suggested the issue of debentures on a non-interest basis. Mr Nancollas felt the matter should be dealt with by the Committee.

Mr P O’Kane was concerned about the low profile of the club from a social perspective, pointing out that at any one time the club could only be sure of approx. 25 members visiting the H.Q.

The decision was ultimately taken that the matter should be passed to the committee.

Barbican Trophy – Mr Oakley requested further clarification in relation to this trophy, ie the meaning of, “to boat”.  It was agreed that this was to mean either inboard or lash alongside, and that the skipper must assume the role of onlooker, giving no assistance, either in the handling of the boat or gaffing etc.

After the AGM, Gerry Nancollas, the new Chairman presented the retiring Chairman, Rex Barnes with a silver salver suitably inscribed in appreciation of his services to the club during the nine consecutive years he sat in the chair. 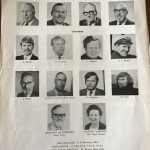