Prior to constructing the newsletter he had been chatting to a Looe skipper. The conversation as reported as follows:

“Thank goodness”, I said to an old Looe skipper, “we don’t get here the thick pea-soup fogs they are getting in London”.

“Rubbish!”  he replied. “I remember once being hove-to near the ‘Stone when the fog was so thick the crew were leaning against it. Suddenly it lifted and they all fell overboard”.

The club was proposing to produce 3 newsletters a year but were concerned about the rising cost of this undertaking. Their solution was to sell advertising space.  Future newsletters featured many commercial adverts, so it seems to have been a successful cost reduction tactic.

A new rule book was issued which had a stronger cover which was intended to last at least 3 years.

New Club Headquarters –  The Looe Harbour Commissioners had agreed to build a new SACGB office and weighing site where the caravan was sited.  As the newsletter was issued Hamish reports that he and Mrs Clemens hoped to be installed in the new headquarters before the season commenced. He also paid tribute to Alec and Olive McVeigh of the Jolly Sailor who had made them welcome for the previous four years, noting that he will, “look back with nostalgia to the days when he could rush downstairs and grasp the stem of a large gin and tonic”.

There is an advert for the Hannafore Point Hotel in the newsletter which notes that the hotel is under the personal supervision of Phillip Heathman …… is this the same man who provided the Phil Heathman trophy?   It states there are, Special Facilities for Shark Anglers but doesn’t give any more detail.

A New World Record – Trevor Prince of Fareham, Hants caught a 324 lbs Porbeagle on August 1968 just off the Nab Tower. He was fishing on the “Gannet” with his friend Mr R Downes who was owner-skipper of the boat. Trevor caught the shark on a rod he had made himself for the sum of £8 – 10 – 0. It was a 5ft glass fibre road fitted with motorcycle hand grips. The bait was a whole mackerel on 130lbs line and a trace made from a motor cycle control cable. It took 1 ¾ hours to bring to the boat.

At Trevors request the Club President had applied for World Record status to the IGFA which had been successful.

Hamish reports that the club now has two members who hold World Records, the other being Mrs Hett Eathorne for her 271 lbs Porbeagle caught in 1957 on 130lbs line.

Mr Downes, the skipper reports that they had been fishing for 4 ½ hours without a run and as the wind was getting pretty strong they were just about to call it a day when the shark took Trevors bait. He recounts his surprise that Trevor managed to maintain his balance while playing the shark as there was a large swell.  After several long runs (some of which were over 200 yards) Trevor managed to get the shark to the boat.  The previous day Trevor had twisted his knee badly so when he put his weight on it while playing the shark and trying to maintain his balance was evidently in pain. During one abortive attempt to gaff the shark he had fell and the gaff had hit him on the face. Once the fish was gaffed it started thrashing about and once again the gaff handle smashed into Trevors face, bruising his chin and forehead, loosening about six front teeth and causing his nose to bleed. 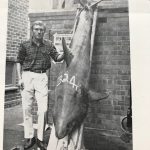 A Thresher Qualifier – The day after Trevor Prince caught his World Record Porbeagle, Tim Howard of Wroxall, caught his qualifier, a 189lbs Thresher, about 9 miles off Shanklin Isle of Wight – in the dark!

With him on the Rosemary was skipper Roy Sergeant. Tim reports, “we had been out for about three hours and just about to pack up as the sea conditions were worsening when he had a run. The first run stripped 200 yards of line. As Roy shone the long-beam torch the shark jumped 12 to 15 feet out of the water. The beam caught its silhouette against the lights of Sandown Bay.

During the next 45 minutes the Thresher dashed under the boat six times and once again leaped into the air at the side of the boat, Once gaffed the shark caught the skipper a viscous blow to his wrist with its tail. 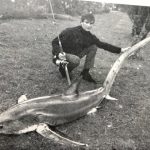 The Clubs International Reach – the picture is of the President presenting Mrs Sonia Speets with the Alan Caunter Trophy.  Mrs Speets came all the way from Holland with her husband for the Annual Dinner and made a marvellous speech in perfect English – and in rhyme. 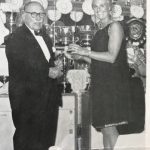 Shark Angling Club of London – This club was granted affiliation to the SACGB. The London clubs headquarters was in 14 New Burlington Street, London, W1.  Its President was Mr S G (Dusty) Miller. 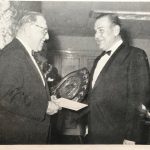 The photograph is the President, Brigadier J.A.L. Caunter, C.B.E.,M.C. (left) presenting the Vice President, Mr S. G. Miller with the T. N. Foster Trophy for the 214lbs Blue Shark he caught when captaining the Club’s team in the New Zealand International C0ntest in 1968

Obituary – Its reported that after a long illness, Mr W Butters, Bill Butters as he was affectionately know to many, passed away. He was recognised as one of the “great characters” of Looe and an outstanding skipper and fisherman. He was a founder member of the club and one of the few who were instrumental in its creation in 1953.