The Chairman, Vic Aldous opened this newsletter stating that it had been a most successful year. The South West summer weather had been wonderful. The number and quality of sharks had also improved.

The highlight of the year was the Shark Angling Festival held in September with Jack Daniels as official sponsors. This was the first official shark angling festival held in Looe.  It had been thoroughly enjoyed by all and many wanted it to be repeated the following year. Vic says that many lessons had been learned and suggestions put forward to make the next event even better.

Jack Daniels had played a significant part in the clubs renewed success and they had pledged their support for another two years at least as they were very satisfied with the SACGB. They had also pledged their support for the latest tagging programme which was due to commence in 1991 which was part of the clubs contribution to shark conservation which had always been a key priority for the club.

The office was now manned each morning, Monday to Friday, from 9.30am until 11.30am by the secretary Karan Sayer.  Vic praised Karan saying that she was a tower of strength to the club and that he found it gratifying to know that they had such an enthusiastic person who had the interest of the club and the sport so much to heart.

Almost every day Karan could be seen carrying out the duty of weighmaster.  He also acknowledged that aside from being very knowledgeable in the sport she was also a very accomplished angler.

He went on to praise Peter Catnach who was the Steward/Treasurer for his enthusiastic efforts and welcoming attitude which he extends to all members or visitors and for making the Caunter Room one of the most sought after places to visit in Looe. Vic noted that Peter had been instrumental in transforming the clubs social and financial position and pointed out that he too was a full member of the club, having qualified that season.

He closed by looking forward to 1991 saying that this was the members club and they should provide their ideas and suggestions to ensure that it continued to operate at a high standard.

I feel a little honoured to be allowed to say a few words to you in the newsletter. I think its about the first time someone has done it without being on the committee.

Well this time of the year all we can do is sit and dream, and dream we may after last season. With 385 sharks caught from Looe, and 33 over 100lb. What is nice to see is that there were 303 sharks released.

The one good thing about shark fishing, is that it is still done as a sport, no arguing with the ref., no fights, a sport you can take all the family, and enjoy a good day out.

The festival was a success last season, with everyone enjoying themselves, what was nice on the last night was to hear the competitors who had no caught a shark asking for more. I hope the club and Jack Daniels keep it going, WELL DONE.

One last thing as a non committee member, may I say I think the committee are doing their best to make the club go, the Caunter Room is being run in a good manner and doing well. The weighing site and headquarters is also being run well and with everyone being treated with the respect they deserve, WELL DONE. I think the club is very lucky to have the staff they have got.

Finally may I wish all members good fishing in 1991

First Trophy Claim of the season

It was reported that the first trophy claim had been received from Jack Reece for the T N Foster Trophy. Jack caught a Six Gilled Shark while fishing from his own boat in the Azores. This was also a new World Record 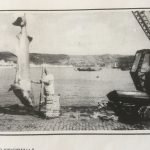