Part way through the season it was shaping up as one to remember. The first “ton plus” Blue had been landed on the 1st June and when this newsletter was issued (not exactly sure) in the previous five weeks no fewer than 6 Blues of over the “ton” had been landed.

The picture is of a 173lbs Blue taken in September of the previous year out of Penzance from the Silver Spray skippered by Alan Saunders. 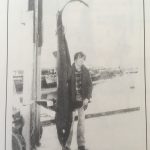 The best Blue year to date was a 114lb female taken by Simon Faulkner when fishing aboard one of the newer boats, the Mercia, skippered by Peter Davis

The Caunter Room was shortly to undergo a refurbishment, with new carpets, furniture and paintwork.

A photograph of a new member, Sarah Davidson, from Nottingham published. Her Blue weighed 120.5lbs, taken in September 1989 from Ivan Chastons, Tethra. 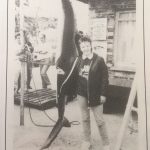 The festival had been sold out and it was hoped that this would become an annual event and members were encouraged to register early for next years event so as to avoid disappointment.

Newsletters had started to print interesting stories and articles beyond the years results, the AGM and the dinner. This months one is below:

A Case of Mistaken Identity

Rex Barnes, the Vice President of the SACGB, tells of his Spanish experience…..

Some years ago, my wife and I were watching a group of Spanish fishermen hauling their net on a beach near Fuegirola. Among the catch was a squid and a small octopus which the threw farther up the beach to collect later. A small group of English people gathered to watch and one lady asked me what these two slimy things were.  When I told her, a very small gentleman in a long coat and a beret told me I seemed to know a lot about fish. When I told him I had seen the likes of these at home, he drew back his coat and, with great pride, displayed the red badge of a full member of the SACGB. I was, as always, wearing mine, and he was very surprised when I told him that, at that time, I was Chairman of the club.

I said, “Excuse me sir, I am very pleased to meet you, but I had no idea we had a Spanish member. The little man drew himself up to his full 5’ 2” and said with a look of utter disbelief, “Spanish – I’m not Spanish, I am a bloody Welshman”

Of course I had mistaken his heavy accent to be a Spaniard speaking poor English. It later transpired that it was from a Looe boat that he had caught his qualifier. In fact it was on a trip with Bonzo Butters, and when I told him that Bonzo and I had been sharking together for years, and we were the best of mates, this Welshman treated me like a long lost brother.

This was the highlight of my holiday, and Bonzo and I often talk about our “Spanish Member”.