Brian Tudor had now taken over the role of secretary from Hamish Rogerson and he began this newsletter, his first, by paying tribute to Hamish who he acknowledges was a master in his field. 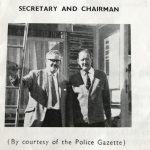 He also looked forward to meeting all the anglers and invited all to visit the SACGB office on the Quay and have a chat with Nora and himself.

Committee changes – Dr. Quentin Bone of the Marine Biological Association of the United Kingdom had agreed to become the clubs Honorary Marine Biologist.  He had already been involved with a BBC Film unit on behalf of the club.

Mr L Butters (Bonzo), skipper of the “Ma Chere” was elected to the committee together with Commander E St. John Holt.

He also reports that he had an enquiry from, “our friends North of the Border regarding the possibility of establishing a centre in Scotland next year”.

Our Lady Club Members continue to impress – Mrs J M Yallop of Norwich caught a 500lbs Mako out of Looe aboard “Lady Betty” in May 1971.

She was accompanied on the Lady Betty, skippered by Alan Dingle, by her husband.  The Mako was sighted on the surface in the Eddystone area.  Liberal amounts of ruby dubby, accompanied by loud shouts of “Oy”, attracted the shark which took Mrs Yallops bait. 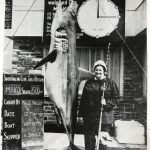 The fight lasted 2 ¼ hours during which it cleared the water on a number of occasions.  When the fish arrived in Looe at the weigh site, it was noted that it had been cleanly gaffed by Alan Dingle and he was praised appropriately.  The shark was caught on 130lbs breaking strain line and the British Shark Records Committee*, declared Mrs Yallop as the new Ladies British Record holder for Mako, pending confirmation from the British Record (rod caught) Fish Committee of the award for the All Tackle record.

*the British Record Fish Committee had earlier refused to adopt the IGFA line class records system which the SACGB had adopted. This meant that the SACGB awarded British Line Class Records, but the All Tackle record (heaviest shark whatever the tackle used) was still in the gift of the BRFC

Shark Signal Code – Yellow pennants had previously been used to signify that a boat was sharking but H M Customs had identified that they could be mistaken for Q flag. From May this was to be replaced with Cambridge blue pennants which signified sharks caught.

The dark blue pennant was retained and signified that the boat was sharking.  This system remains in place today (2018)

Bacardi June award – the Bacardi sponsorship was still in place and the June prize of £50 went to David Turner of Oxford for his 355lbs Mako, caught 7 miles south of Falmouth on Robin Vinnicombes, Huntress. 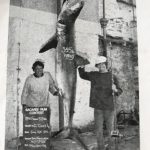 Bacardi July award – the smart money was on Mr George Hicks of Binstead, Isle of Wight with his 278lbs Porbeagle.

Welsh Trophy – Mr Gareth Evans, a member who lived in Barry, Glamorgan kindly donated a hand carved shark trophy which was to be awarded to the member who catches the best shark (any species) during the season who is a resident of the Principality.  It looked stunning as the picture below shows. 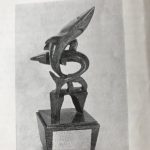 New British Record – This was awarded to Mr George Hicks on Binstead, Isle of Wight for his 278lbs Porbeagle on 130lbs B/S line, caught whilst fishing aboard the Zane Grey, skippered by D Downes off the Isle of Wight

Social Evenings – the aptly named Shark Bar at the Hannafore Point Hotel was reserved fro SACGB members and their guests every Tuesday evening from 9am during the season.

Sharkhead Receiving –  the club had purchased a marine radio which had been installed in the headquarters. This enabled skippers to provide advance warning of big sharks on their way in to the weighing centre.  The call sign was SHARKHEAD. The club were only allowed to use the equipment to receive and couldn’t transmit

Threshers – the Thresher had become very scarce and national press contribution was that they had all went to Deal!

Visits – Brian announced that he was going to visit all the main sharking centres to enable him to put “faces to names” ….. not sure how many there were

Masters of Verse – You will have gathered by now that our predecessors had a passion for writing poetry. In this newsletter Jim Hughes (this is the same man that the original Cornish Trophy was named after) who was living/working in Saudi Arabia submitted one which went like this,

There are some you must fight,

And some you can play;

Be pleased with the ones

And a few measure tall;

One or two you can mount on the wall

To remind you again

That your memory’s right,

Even the wall gets bigger at night.

But the biggest ones you never see,

Missed, not forgotten, still in the sea.

Yet across a table, late at night,

You can talk with ease of the terrible fight

Of that biggest fish, that was almost yours;

Damn that hook bent in his jaws!

So finished a dream, that grows and grows

Out of proportion – Heaven knows.

The ones that make your chest expand

You’ll never forget how that hook was bent!

Yes, fishing, like living, is a “Great Big Game”,

So try, treat them both just the same