In the 1965 Annual Report the Leaping Mako Tapestries were announced. These were provided by Mr. W H Dutfield and they were to be called the Dutfield Axminster Tapestry. Originally these were to be presented to every member who weighed in a shark or sharks of or above the qualifying weights below. The boatmen concerned were also to be presented with rugs but only one per annum. 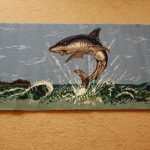