Catching three, perhaps four species of Shark is a great achievement for anyone and something that many of us will never achieve. To go beyond that is exceptional. 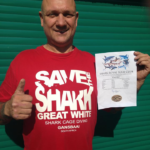 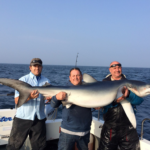 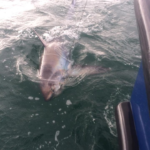 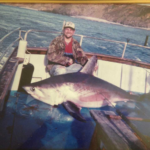 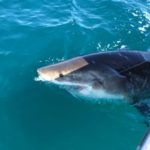 As Chris set the hook in a Tope aboard Phil Brits boat, Blue Fox out of Padstow 22 years ago, little did he know this would be the start of a journey which would test him in so many ways. The fish turned out to be a Tope of 60lbs. A very satisfactory start to what was to be a challenge which would test his patience and skills to their limit.

Four years later with his appetite for shark angling increasing he decided to look further afield to satisfy that ever growing desire which develops from catching different species.  A bit of research led him to Strasbai in South Africa where he teamed up with Skipper Trail Whitun aboard the Rusvic. His reward was a 210lb Bull Shark. This was a long battle and one which Chris remembers vividly.

Returning his focus to the UK, a day’s sharking in 2002 with Ken Cave, skipper of the Peganini out of Boscastle delivered a magnificent Porbeagle Shark of 484lbs which set a new English Record.

It was some 10 years later before Chris had the opportunity to add to his growing list of shark species when on a trip to Watamu in Kenya with Skipper Steve George he added a 150lb Black Tip Shark to the list. The fish inspired him to return to Kenya the following year.

This return trip was to test Chris in many ways.  As he says, “I have generally been quite lucky when I have targeted a particular species and usually have succeeded within 3 or 4 days. The Tiger shark was very different. It alluded me for 18 days and it was my fourth trip before I connected with one. I hooked three but only caught one”.  He remembers being almost torn out of the fighting chair as the 600lb Tiger Shark dived continuously to depths of around 300 feet and stretched the 180lb class gear and 130lbs breaking strain line, and Chris, to their absolute limits.

The Tiger Shark experience was a pivotal point for Chris as he realised that another 4 species would allow him to apply for an IGFA Shark Royal Slam Award. Until now it had been all about satisfying his passion for sharks which had driven him.   With an IGFA award a distinct possibility, another dimension came into play. His competitive streak took over and the as they say, “the game was on”.

Two years later he teamed up with Andrew Alsop aboard the White Water and went on the hunt for Blue Shark. The Celtic deeps quickly delivered and a very respectable Blue of 188lbs was quickly added to the list.

The following year Chris headed first to Cape Verde and aboard the Seaquest skippered by his old friend Steve George, he added a 400lb Hammerhead shark to his list.  The IGFA award was within his grasp now and in the same year he once again travelled to Strasbai in South Africa where he had previously caught his Black Tip Shark.  This time the stakes were much higher as he was targeting Great White Sharks. He used 130lbs gear and 130lbs breaking strain line. Chris recalls the event, “this was without a doubt the most powerful fish of them all, it towed the boat for approx 1.5 miles in over 2 hours”. We can only imagine his sense of satisfaction when the fish was brought alongside the boat and estimated at 2200lbs.

With one more species to achieve the nine required by the IGFA Chris decided to target Thresher Shark. He contacted Danny Vokins, the Bembridge skipper of Midnight Rambler and explained his position.  Danny suggested his chances would be best on a full moon tide and so a four day trip to coincide with this was arranged. Chris recalls that they fished with winds gusting 5 to 6 from the west until the last day when the wind changed direction to the north and pushed them out beyond the “Thresher corridor”.  Memories of the 18 day hunt for the Tiger Shark came flooding back as he approached the final two hours of the four day trip.  Suddenly a fish took the bait and the ratchet screamed as it moved off like a train. Chris recalls the speed of the Thresher being, “breathtaking”, and a level of excitement and anticipation beyond anything he had experienced so far. This was the last part of a 22 year journey and he felt a mixture of excitement and apprehension as he played the shark.  The battle was recorded and is available on YouTube.  Chris’s sense of relief is clearly visible as Danny reassures him that he has touched the leader so the Thresher, “is now a caught fish”.

And what a fish to end the journey with. Reliably estimated at 400lbs plus it was then released as is befitting of these magnificent creatures.

So, what now for Chris. With the IGFA Shark Royal Slam secured, a well deserved rest and time to reflect on his achievement, but he is already planning his next challenge so watch this space.