This trophy was donated to the club by John Ardin during the 1990/1991 season.  John became a member of the club in July 1989, when he caught his qualifier, a Blue of 91lbs out of Looe.  He went on to win the Gloucestershire Trophy in 1994 with a 123.5lb Blue shark taken aboard Ivan Chastons boat on the 7th October 1993.  The same year he took the Mitchell-Hedges, the Norman Lorraine and the Auger trophies and went on to take the Gloucestershire trophy again in 2013. 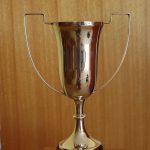