In December 2017 a Porbeagle Shark was caught and released off St Ives. The shark had previously swum into a loop of banding tape and as it grew the tape had begun to cut into its girth.  The shark was brought aboard, and the banding removed prior to it being released safely back into the sea.

The shark was named the Plastic Porbeagle and its picture was posted on SACGB Facebook page where over 4600 people viewed it. It was also reported in the media including the local and national press and one TV station. 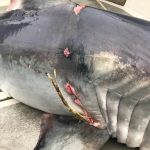 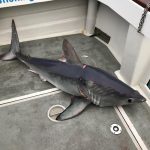 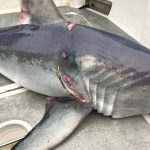 As anglers we see first-hand the damage which can be done to fish through the irresponsible disposal of plastic whether it is caused by large items such as banding or much smaller items like pieces of monofilament or netting.

This one was rescued by a St Ives commercial fisherman. 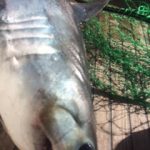 Over a season many anglers and skippers will remove plastic debris and long line hooks from sharks and other species. The purpose of this section on our website is to share these events.

If you come across a shark or indeed any other fish which has been suffered due to indiscriminate dumping of plastic, nylon or any other debris please send us details along with a picture, so we can record it and share your experience with others.

No matter how diligent we are with managing our personal plastic disposal it’s always good to constantly remind ourselves of why it’s necessary to continue to be vigilant with our waste disposal.

June 2018 – just got news of another Porbeagle with a piece of plastic round its gills. This one was caught and released from Andrew Alsop’s boat in Milford Haven. 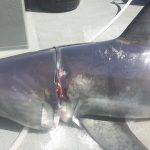