At the 9th December 1966 committee meeting the secretary read a letter from Mr S G Miller in which he offered a trophy to the club. The designation of the trophy was for it to be awarded annually to the skipper who caught the most sharks of qualifying size in a season. This was proposed by Mr. E C Were and seconded by Mr D Denne. The trophy was first included in the listing in the 1967 Rule Book.  At the committee meeting of 7th November 1967, it was carried unanimously that the boatmans prize (£?) should be awarded to the boatman who caught the most sharks of the season. The secretary was asked to write to Mr S G Miller to ask if was agreeable for this prize to be combined with his trophy. The following months minutes (16th December 1967) record Mr S G Millers was in agreement with this request.

The minutes of the 30th March 1971 meeting note that skippers £10 prizes were agreed to be discontinued. However at a committee meeting on the 8th August 1971 it was noted that the skippers prizes were still in the rule book so they were reinstated for 1971 pending a review before the following year 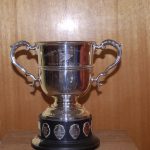