This trophy was originally donated by Bill Elliot in memory of George Brookes. In the April 1980 news letter, the then secretary Brian Tudor reported that Bill had passed away during the year and that Mrs Elliot has awarded the Brookes-Elliot Trophy in their memory. 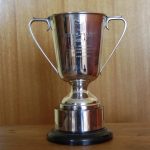