Awarded annually for the best shark of the season

This trophy was donated to the club by our first President, Mr F A Mitchell-Hedges at the first club General Meeting in the Hannafore Point Hotel in Looe on the 25th January 1953.

At that point in time the trophy had a value of £200 and it was used as security with the bank for the club to obtain start up funds via an overdraft. 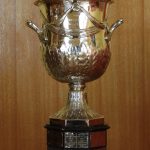