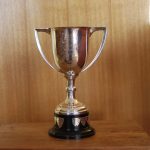 In the 1965 Annual Report its recorded that Mr Ron Gibson, a long standing member of the club had donated a this trophy which was to be awarded for the member resident in Yorkshire weighing in the best shark of the season. The trophy was to be known as The Ron Gibson Trophy