This is first mentioned in the minutes of the committee meeting held on the 31st March 1972 when it was noted that no application had been received for the trophy, so nothing could be done. It was agreed that a letter of apology be sent to Mr Linley.   Reading between the lines it seems that Mr Linleys trophy declaration had been received late or there was some sort of issue with it. There are no further comments relating to this issue in available club minutes.

K A Bones caught his 87lbs Blue Shark qualifier aboard the Gay Buccaneer , skippered by himself out of Looe on the 20th August 1966 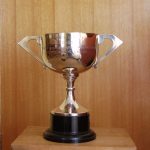