Awarded annually for the best Thresher shark of the season

The original Thresher trophy was donated by the Martini Rossi Company. The minutes of the committee meeting of the 26th September 1958 note that no Threshers were caught that season and the secretary was instructed to write to Martini Rossi to advise that “the trophy had once again found no winner” and that they should reconsider the trophy challenge.

On the 8th November the committee meeting minutes record that there “is evidence of Thresher sharks in the area”,  and the secretary being instructed to write to Martini Rossi to ask them not to change the terms of their trophy.

The last record of an angler winning the Martini Rossi Trophy was in 1990. 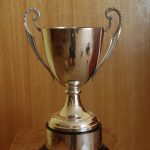