Increasing postal and other costs were still proving to be a restrictive factor with club communication and which had driven the club to only issue two newsletters this year.

It was still the hope of the Committee that the Caunter Room profits would begin to subsidise the clubs operating costs and that member communications would be one of the beneficiaries.

Cdr. and Mrs Holt had stepped into the breach with regard to the Bacardi sponsorship which had been withdrawn. For the first season these would be restricted to Looe which was due to administrative complications and the additional costs associated with a nationwide competition.

Members were urged to return their voting slips in respect of Proposition A which Brian went on to clarify. The proposition was to obtain premises adjoining to the Caunter Room which would increase the club space. One of the first priorities of this proposed additional space was to provide facilities for members children.

The Caunter Room had proven its worth outside the sharking season as it had become a meeting place for members. There was mention of teething troubles which it was hoped would soon be “ironed out”.

A Grande Draw was announced (5p per ticket, 25p per book) the proceeds of which were to be split between the Club, Rotary Lions and the RNLI.

Holt Awards – these were monthly awards and the prizes were a Kodak Tele-Instamatic 330 Camera and carry case. One for each month from June to September.  The rules were:

The skipper member qualifying as runner-up to the Cock of the Fleet award was to be presented with a pair of binoculars suitably embossed on the case with their initials.

Both of these awards were kindly donated by Railright (UK) Ltd. – a member of the Holt Group of Companies.

Treasurers Report – this was the first time the club had been involved with trading on a sizeable scale and they were also having to deal with VAT.

The Caunter Room was seen as a future positive contributor to club funds which amongst other things would enable member subscriptions to remain stable. It was hoped that the overdraft associated with the Social HQ would be fully repaid by end of December and that it would also be on an “even keel” with the brewery. Provided this was achieved then that just left the 5 year loan to repay.

Other costs continued to rise with an increase in professional fees associated with the Social HQ lease, postage was continuing to rise at “a frightening rate” and the same applied to rent, rates, lighting and heating which were to a large extent beyond the control of the club.

The weighing site had for the second year running been self supporting. The subscription account was misleading as the fall off in revenue was due to Life Membership income. The club were also dealing with VAT for the first time.

After 32 weeks the Caunter Room was showing a balance of income over expenditure of nearly £400. There was a loss on food which was attributed to “trying to run before walking” which had led to waste.

The 1975 Annual Dinner had given a £75 loss which was blamed on inflation. There was a £780 short fall on the loan account and a £450 backlog on the Brewery account.

The final statement was, “Overall I am sure that members will agree that the committee were justified in going ahead with the Social HQ venture and I trust that the accounts for 1976 will show an even healthier position than the enclosed……..”

First Annual IGFA Fishing Contest – this was announced and the rules for the contest given. It was to run from April 1st 1976 to midnight December 31st 1976

Emblems – Emblem pricing continued to increase but did not appear to be any less popular. The latest listing is given below: 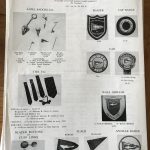