Hamish starts with an important announcement .  The timing of the Social Evenings in the Shark Bar at the Hannafore Point Hotel had changed to Tuesday evenings from June 4th to September 24th. The start time remained at 9pm but an extended licence was now available until 11.30pm.

A Little Knowledge is a Wonderful Thing

Hamish writes …. “Oo-o-o Mr Smith, do you reeely catch sharks?” asks the young lady. And the apocryphal Mr. Smith, who has only caught a couple of sharks in his life, seizes the opportunity to hold forth and impress. Hamish continues that in order to help Mr Smith with his “nefarious purpose”, he had culled from authoritative sources, information with which members, so inclined can enthrall any captive audience.

His article was based on information from the National Geographic Magazine, it starts with …. Sharks are among the most adaptable and hardy forms of life on our planet and some have changed little, if at all, from their ancestors who haunted the primordial seas 500 million years ago.  Fortunately the most formidable of the prehistoric sharks are extinct but in a few cases they have left descendants of considerable size. A single tooth from a Miocene fossil completely covers a mans hand and came from a nightmare creature called a Carcharodon Megalodon which measured anything up to 120 feet long and could easily have accommodated six men standing up in its gigantic jaws. Its direct descendant is the 35 foot Great White or man-eater (Carcharodon Carcharies) found in tropical and sub-tropical waters.

Of all the hundreds of shark species known at present only none are proven man-eaters, but note that these include Mako, the Blue and the Porbeagle. Even the smaller species if shark found in coastal waters will attack if provoked and can, and often will, bite hard.

How hard can a shark bite? Dr. Perry W Gilbert made some tests in the Lerner Marine Laboratory of the USA. He made a “bite-meter” from a short bar of aluminium of known hardness inserted into a suitable mouth watering bait. This was offered to a large shark who immediately clamped down hard on the apparent meal and, finding it not to his liking, spat it out. Knowing the pressure needed to dent the aluminium to the measured depth of the dent, Dr. Gilbert calculated that the biting power of the shark was – what woudl you say, a few lbs? – no dear member, 18 TONS per square inch.  A large Blue shark, flat out, can do 20 knots and thinks nothing of tearing our 10lbs of flesh at a time.  Pleasant creature.

I always understood that to drive away an attacking shark the best thing to do was to make s great splashing. Not so, says, Dr W Wisby of the University of Miami’s Institute of Marine Sciences, and Director of teh USA’s National Fisheries Centre and Aquarium planned for Washington.

“Obviously”, he says, “if a fish is belly-up the shark can see that something is worng with it, but from far beyond visual range other senses possessed by a shark can pick up distress signals. Low frequency sounds or pressure waves interest sharks which have adequate hearing as well as pressure sensors. If a sound is rhythmic and regular, denoting swimming activity, a sharks appetite may not be unduly roused and the predator may go on his way. If however, the noise is something out of the ordinary – jerky or thrashing or struggling – then the shark may sense prey and follow it purposefully.

“We put the sounds of wounded fish and thrashing swimmers on tapes and played them back below the surface of the sea off Florida. From a plane I saw sharks cease from whatever they were doing to home in on the sound from a considerable distance”.

So instead of just hanging the rubby-dubby bag gently over the side it seems we ought to belt the sea with it.

Why Not a New World Record

You who dream of catching a World Record shark will be interested, if perhaps a little dismayed, by the World Records registered officially by the International Game Fishing Association (IGFA) who are the ultimate authority on these matters. Our President, Brig. J. A. L. Caunter, is its British representative and the club is a member of the Association.

Here are two tables I have prepared of World Records for both men and women, and women only, for those species of shark visiting British Waters. This is the first time this information has been published in this form. British records are shown for comparison in the last column.

*the only World Record currently held by Britain, caught in 1957 by Mrs Hetty Eathorne, a well known Club member (see picture below)

Five members (3 women) of the Club have in the past achieved World Records and all British Records with the exception of the 281lbs Thresher were caught by members of the Club. Bit now it seems to me that our chief hope of collaring any new World Records in British Waters would be a Mako, Porbeagle or Thresher exceeding the weights listed in Table 1 for these species on a 12, 20 or 30lb line. 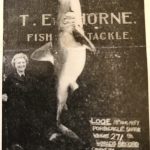 Lady members of the Club should particularly note that in Table 2 a World Record is wide open for apparently any reasonable sized Porbeagle or Thresher on 12, 20 or 30lb line.

What chance have you? Well, in the month of November for the past two years the boatmen have been gleefully catching great quantities of mackerel which have appeared of the SW coast in shoals literally infested by Porbeagles causing damage to their handlines. In one instance “Junior” Symonds of the “Blossom” caught one on a small hook which was promptly straightened out. In other instances skippers tried without much success to drive them away. And Bill Cowan, skipper of the “Westward” tells me that during May in each of the past two years he has seen Thresher sharks with their scythe-like tails cleaving the sea about 3 miles off shore between Fowey and Polperro. Any member interested, however, may have some difficulty in persuading a boatman to take them out in November for the usual charge. They are alleged to have been making far more money with their mackerel catches than they earn shark fishing in the summer!

Our team went to New Zealand for the International Big Game Fishing Contest referred to in the previous newsletter. Hamish understood that Barrie Heaths songs, delivered on board to an appreciative audience during the long wait for a bite, would hardly get by the Lord Chamberlain.

They hooked four fish, lost three and boated one of them during a total of 54 hours fishing time. If they had even captured three they could well have won the contest. It was also alleged that it was not the anglers fault that one, if nit two, got away.

Of the 217 boats that competed only 201 fish were caught. The team captain, Dusty Millers report is as follows:

We were up at the crack of dawn just as the sun was beginning to show over some distant shore. A cold shower to the accompanying chorus of crickets and mosquioes, which were never out of range of a strike on shore. Breakfast and to sea as soon after 6.30 as the stowing of the gear would allow. The grog was originally put aboard to celebrate the occasions of capture, but in fact it was used medicinally to cure the melancholia.

A dash at 10 to 12 knots to some off shore rock where 7 or 8 Kahawai salmon-like fish 16 to 18 inches in length were hand lined aboard. These were kept in a tank below decks as the live bait on the day and the dead bait of tomorrow.

8am and the busieness had begun. The rods were over the side, Two 50lb lines with colourful lures and two 80lb lines with dead Kahawai on the outriggers; one of each to port and starboard, trolling on, or near, the surface. At 12 knots a fish would have to be an acrobat to take them.

On reaching our selected piece of sea at about 9 o’clock the baits were changed for live Kahawai, four on 50lb lines and so they could swim naturally below the surface, speed was reduced to 2 knots.

We trolled up and down and round about, sometimes in the company of up to 17 other boats, at distances which were often so close that the crews chatted to each other. All this took place not far off shore and I would liken the armada to all the Looe boats sharking in the Bay from Downderry to St George’s Island.

At 3,30pm baits were changed fro lures and the dead Kahawai for the fast troll homewards, and even though 5pm was at the end of the days competition fishing, trolling continued in anticipation of a strike right up to the time of disembarkation at 6.30pm, by which time the sun was well beyond the yard arm. A quick shower, dinner and off to a very welcome bed at 9.30.

During the whole of this boring experience the ship to shore radio was blaring forth like a fairground barker with all the respiratory diseases under the sun.

Multiply this routine by six and you will soon come to know our feeling of disappointment at having a mere four strikes. Apart from the few occasions when, in utter desperation, we attempted to bring something up from the bottom some 70 fathoms below, we adhered to local practices. These might have been satisfactory for Zane Grey when fish were plentiful but I think them antiquated now that Marlin are so scarce.

Disappointing as the whole competition was, I suppose that there is some consolation in knowing that the total number of fish caught represented something less than one per boat. The winning team captured their two fish, a Marlin and a Hammerhead shark, in an hour, and saw nothing else throughout the whole of the competition. A little more luck and the British team might have had something more to write home about.

1st Day – Harry Dutfields line ran out, but he was left with only the head of the bait

3rd Day – Barrie Heath struck and successfully hooked a Hammerhead of well over 300lbs, which was lost by unfortunate maneuvering of the boat, causing the trace to break

6th Day -Peter Wright successfully struck a Hammerhead of over 300lbs just 4 minutes before the  end of the competition, but after playing it for 40 minutes the line broke

Our hosts were delighted by our presence and made the members of the team most welcome through the medium of the Lord Mayor of Auckland, at whose reception we were given pride of place. The television, radio and newspapers also treated us well by giving excellent coverage.

What a Start to the Season

According to Club records the earliest a shark had been caught was may 6th 1961 by J Hawkins who was a Club member. Hamish was surprised at this as Porbeagles and Mako were around all year round.

On the 15t May this year Bill Elliot, owner of the “Moby Dick” of Looe, skippered by T Webb caught a 241lbs Porbeagle over the rocks near the Eddystone. He used pilchard as a bait on 80lbs line. Bill joined the Club in 1956.