The first item in this newsletter was the opening of the SACGB’s own clubhouse. This was a first in the clubs history. It was called the Shark Club and its address was Quay Street, East Looe. 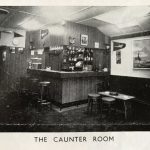 It was opened on the 24th May 1975 by the Chairman and the traditional cork was popped as the Chairman declared the club well and truly launched. 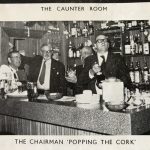 With the President (“Briggy”) unable to attend due to ill-health and “Dusty” the Vice President having a prior overseas appointment, the only founder member of the Club able to attend was Edgar Williams.

The Vice Chairman Cdr. E. St. John Holt and many of the Committee and their wives were present together with a number of local members and guests.

The Chairman in his speech announced that the room would be named “The Caunter Room”, in honour of the clubs Founder President.

The loan scheme announced in the previous newsletter did not however reach the target required to prevent the club having to borrow from the bank and due to this the scheme remained open for any who wished to contribute.

The telephone number of the club was Looe 3375

The sharking season had got off to a good start with some very good sharks being caught. The first Looe shark was a Blue of 105lbs from the “Venture”. The first shark of the season was a 75lb Blue on Tuesday 3rd June off Mevagissey by Sam James on “Rippling Wave” on 20lbs breaking strain line.

News from other Ports was reported to be more plentiful and in Appledore the “Jose Jaqueline” was having some good catches of Porbeagle and at Newquay S Fraser had caught a 126lbs Blue aboard the “Charlotte Rose”.  Finally, after a number of blank years a Thresher had been caught. It weighed 84lbs and was caught by Mr Jiovvany on “Come Quickly” off the Isle of Wight.

John Weedon had contacted the club recently from Jersey (in the magazine it refers to Jersey as a the tax haven …) and reported a 300lbs Porbeagle being landed by a non-member.

The fear of the last few years that interest in the sport had been waning had now proven to be groundless as a growing interest had begun from members and non-members as applications and enquires made to head office had escalated.  The shark fleet was operating daily due to much improved weather and the number of light blue pennants were growing with a goodly percentage above “the dark blue”.

There was an air of optimism once again.

Rule Book – another rule book was close to being issued and members attention was drawn to Angling Rule 16 which prohibits the use of flesh etc as “rubby-dubby”.

Obituary – Two long standing club members, Jack Bray of Looe and Jack Butters skipper of the “Paula” had passed away.

Shark Angling at Looe – this booklet was written by “Briggy” and the club had been given a number of them which were available to members for 5p per copy plus 12p postage.

Annual General Meeting – this was the clubs 23rd AGM and as usual was held at the Hannafore Point Hotel.

With the President still ill in hospital and the Vice President unable to attend the meeting was opened by the Chairman, Mr. G Nancollas. He commented on the recent opening of the Shark Club which he trusted members would take full advantage of and also that this area of additional funding for the club would enable subscriptions at current levels.  The meeting was informed that the club was in a good financial position having made a profit of £920. However, this included many Life Memberships which would be non-recurring. Stocks of emblems were high as they had been purchased to take advantage of the continuing inflation. The Shark Weighing site had for the first time shown a small profit.

Propositions limiting the Chairmans consecutive terms of office to two years (44 for and 4 against), and the Shark Club rules (unanimously) were carried

Extraordinary General Meeting – The Chairman G A Nancollas explained why the committee considered it necessary to hold an EGM. The President (”Briggy”) was held in very high esteem and the club acknowledged it could never repay him for all the work he had done on behalf of the club. In his current state of health however he was unable to continue with his Presidential duties and it was felt that the time had come for the club to show its appreciation by making him a Founder President in perpetuity which would relieve him of the duties of being the President.

Members were urged that if they could not attend the EGM that they returned their voting slips for this proposal.