The sharking had been very good until August when the Blues had disappeared overnight which was much earlier than previous years.

Many new members had joined during the year which had helped to counteract the membership reductions driven by the economic climate in previous years. The Caunter Room was proving to be a success and its reported that, “many a happy hour” has been spent there by members from home and overseas.

Reports from other ports were more frequent and was evidence that the sport of shark angling was increasing in popularity.

Three new line class records had been awarded and the ratio was 2 to 1 in favour of the ladies. With the Records Committee not having to consider any record claims in the previous year this was welcome news.

It was reported that at the EGM, proposition C had been carried and “Briggy” was confirmed as the Founder President of the SACGB.

Dusty Miller was now President and three new Vice Presidents had been elected. They were, Rex Barnes, Jack Horrex and Gerry Nancollas.

The club had completed their first year as a contributor to the Sea Angler magazine which was considered a successful venture.

The film “Jaws” had just been released and the media were taking advantage of its popularity. The club noted that much of what the press were writing contained little fact and in fact most of it was fiction which was in the interests of sensationalism.  One, “well-read” newspaper had contacted the club and had sent a team to SACGB HQ for a week to research for an article, which at time of going to press had not been published.

One member had contributed to an angling magazine and had misreported the qualifying weight for membership as 70lbs when it was of course 75lbs. This error was pointed out “politely” by Brian in this Newsletter.

The 23rd Annual Dinner – once again it was held at the Hannfore Point Hotel. Attendance was well down on previous years and only 100 members and their guest attended.

The Grand Buffet lasted from 8 until 10pm and was reported as excellent.

Whilst many of the familiar faces were absent, including “Briggy” there were many first timers to the event. This year the entertainment came from a new band, the Blue Hawaiins who played until 2am! 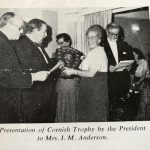 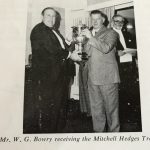 Shark Tagging – the tagging being managed by the clubs Hon. Marine Biologist and John Stevens was beginning to show results and a large part of this newsletter was devote to these. The article is very interesting and as such has been retyped fully below:

During 1975 the tagging programme has provided some extremely interesting information on Blue shark movements. In the March 1975 newsletter we reported the recapture of a Cornish tagged shark some 2000 miles out in the central Atlantic. Subsequently a Blue marked in Penzance has been recaught by a Russian long-liner some 900 miles of French Guiana, South America (3200 miles travelled), and two further Cornish tagged sharks were recaptured by sport fishermen in Long Island, USA, a straight line distance of 3500 miles.

To date these are the longest migrations ever demonstrated by Blue sharks and they show that some sharks travel right around the North Atlantic utilising the major current systems. It appears that the westward journey is made on the Canaries current and the return movement on the Gulf Stream and North Atlantic drift. I hope these very exciting results will encourage more people to join the tagging programme. To date we have 28 returns from 2000 marked Blue sharks, an overall recapture rate of 1.4%.  Along with the Blues there have been a few Porbeagles tagged, and during 1975 one of these was recaptured from the west coast of Denmark.

Returns since the last newsletter are:

No? (green) – tagged south coast of Cornwall. Recaptured 9th August west of Fire Island Inlet, Long Island, USA by Eugene Adkins. (this fish was released again but in removing the tag, the half with the mumber on it was lost)

Records Sub Committee – for some time the records activity had been very low indeed and J W Brown, its Chairman happily announced that the Records Committee once again had work to do. The new records are listed below, and Johns view is that they would stand for some considerable time. However, he qualifies this statement by saying that different shark angling methods may be what would topple these. He was referring to the New Zealanders and the Australians who used very fast boats which enabled them to hook and boat very large sharks on very low breaking strain lines. He did feel however that the way sharks were fished for in the UK was far more sporting and therefore represented a greater achievement.