His introduction confirms that 1974 was a year with much bad weather however, in spite of lost days at sea the Club had prospered as a whole essentially due to the increased number of sharks of 100lbs and over.

The reports from other parts of the country had confirmed that this was a Blue shark year with very few Porbeagles. A small number of Makos and Threshers had been sighted but none landed.  The Records Committee had received no applications for new records.

1975 was to become the fifth year with no subscription increase which meant they continued to be £2 per annum. Emblem suppliers continued to increase costs to the Club which had to be passed on to members. A new Car Badge was going to be available in March.  The club were now able to accept payment by Access or Barclaycard but this facility was not available for the payment of subscriptions.

In the year 274 new members were enrolled. With only 97 resignations this gave the club good subscription growth.

The continuing economic and political situation was leading to increases in postage and printing and as a consequence the planned extra newsletter had to be postponed.

Outside the Sharking news it was reported that the Vice Chairman, Cmdr. Holt had been awarded the British Record for wreck Fish with a 7lbs 10oz specimen.

The Sea Angler magazine had invited the club to become a monthly contributor from January 1975.

The search for another sponsor to replace Bacardi had failed as the one interested party could not proceed due to the economic climate.

Rex Barnes, the previous club Chairman was wished a very happy 65th Birthday.  Brigadier Caunter presented the prizes and members and guests danced to Bill Collins and his band.

There were a number of new members attending with some from Appledore, the Channel Islands, the  Isle of Wight, Lymington, Mevagissey and Oxford. 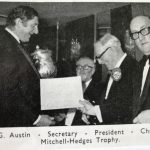 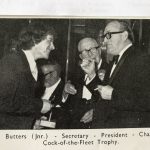 Tagging – 1974 had been a successful year for shark tagging with a total of 630 being tagged and a further 8 re-captures. This gave a total of 1560 sharks tagged over the three years and 16 returns giving an encouraging return rate of approx. 1%.

Analysis of the date enabled some general observations to be made.  The view was that sharks tagged of the South Coast leave around the end of September although some of the larger ones left later. Some then stay until at least the end of November in the area of Northern Spain after which they move on as far as the Canary Islands. This migration is then reversed in spring.

Recaptures of Portuguese tagged sharks suggest that small Blues tend to remain within a relatively restricted area further south and most don’t take part in the northerly migration to the UK coast until about the third year.

Details of the eight recaptures are given below: