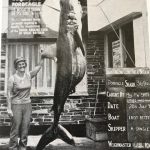 Pat caught this magnificent shark aboard Lady Betty, skippered by Alan Dingle. The fish took eighty minutes to bring to the boat and was taken 14 miles south of Looe.  Pat was only 4ft 11inches tall and the shark was 8ft 10inches in length!

Pat reports, “I began to feel very tired toward the end, but it was well worth it. When I was playing it I thought it was big, yet I never imagined it was that big”.

Pat had been coming to Looe for her holidays for many years, spending nearly all her time in pursuit of sharks. She joined the SACGB in 1966 with an 82lbs Blue. She had been fishing since she was eight years old and met her husband in Looe.
She goes on to say, “I was thrilled to bits with this catch, but now I have broken the record I don’t care what I catch. I’ve already booked up our holiday at Looe next year”. 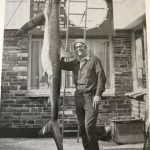 The club took the opportunity to stress the importance of using “Class” lines when attempting to break an existing line class record. Its noted that two claims had already been rejected as the lines used were found to exceed the believed breaking strain. This remains as true today as it was back then…….

The prizes were presented by Mr Bacardi himself at the Europa Hotel, in Grosvenor Square, London.
Hamish attended the ceremony and on arrival he was asked what would he like to drink. Without thinking he replied, “a gin and tonic please”. He says the silence that followed could have cut with a knife as displayed on the bar counter were around 20 bottle of Bacardi Rum …. nothing else.
He reports that after several glasses of neat Bacardi, all was forgiven. He went on to establish that Mr Bacardi lived in the West Indies and was a dedicated big game fisherman. 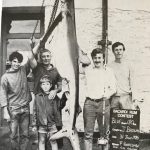 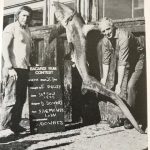 The following is an account of the fight Philip Taylor had with his 370lbs Mako written by David Turner who was aboard Robin Vinnicombes boat, the Huntress, the day the shark was caught. The photographs were also taken by David.
The rain which had started off as an occasional shower was now coming down hard and continuously, backed by an ever-increasing wind, when Phil’s reel gave a short burst. Phil struck hard and the shark took a bit of line but then started coming in easily just keeping the line tight. “About 30lb”, Phil said. We agreed – nothing very big. Then I looked up and much to my surprise, the shark seen just below the surface was moving along at a fair old rate but still keeping the line tight.
“I don’t think he is so small”, I said to Robin, “I don’t think he knows he’s hooked yet”. Robin said nothing, but I could tell by the way his eyes were fixed on the line that he suspected something unusual about this fish.
“The shark turned and started heading back in the opposite direction and from the angle of the line we could tell he would soon break the surface.
“Mako !” , shouted Robin as the fin and tail of the shark broke the water. “Get those lines in, get the flying gaff”. Everyone sprang to life obeying his commands. Meantime the shark had seen the boat and he lifted his body three-quarters out of the water and, angrily shaking his head, crashed down and in no time tore 150 yards off the reel.
At the end of the run he hurled his whole body 7ft into the air. Then changing his tactics he swam astern of the boat, quite close and proceeded to circle round. Phil, who had just managed to get the harness attached to the reel, now had to undo it and pass the rod under the mizzen while someone held on to his legs. The Mako jumped again and then took off at high speed round the bow of the boat, jumped again and ran off the bow for another 150 yards. Normally Robin would have started the engines and kept the boat turning when the shark circled but the weather was so bad now that everything and everyone on board would have been thrown about all over the place.
Again and again the Mako circled the boat and every time we thought he was tiring he would jump again and run off another 100 yards of line. At one time when he was about 20 yards from the boat he coughed up a large monkfish which must have weighed 30 – 40lbs. 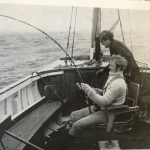 The picture above, taken by Dave Turner is of Phil Taylor playing his 370lb Mako

Despite the cold wind, sweat was poring down Phil’s face and he breathed a sigh of relief when the top swivel appeared. Robin got the first gaff in and Mr Fagan of Yorkshire got the flying gaff in. Then the shark started twisting and it took three of us to, on two gaff ropes, to hold him still while Robin administered the “coup de grace”.
Robin got on the radio to the other boats, “Polaris! Polaris! Huntress calling Polaris!. We got him John, about 350lbs. On reaching port we all piled off the Huntress to change into dry clothes before weighing the shark, which turned the scales at 370lbs.
The battle had lasted one hour five minutes and would have lasted longer if the shark, which stayed on the surface for most of the fight, had not been knocked about by the big waves which occasionally bowled him right over. At the end of the fight the wind was rising force 8. Heavy rain was driving in almost horizontally and visibility was down to about ¼ mile.
Philip Taylor is in the Department of Zoology at Oxford University and specialises in fish diseases. 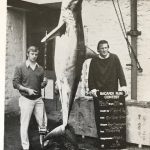 Annual Dinner – the annual dinner and prize giving was a little special as Pat Smith and Paula Everington were awarded special trophies in recognition of their world records. The trophies were presented by the Lord Lieutenant of Cornwall.

The picture below shows the President on the right with his guests of honour at the Annual Dinner. Next to him is Col. Sir John Carew Pole, D.S.O., T.D. (Lord Lieutenant of Cornwall), Mr D P Case (Chairman of Looe U.D.C) and Mrs Esme Couch, J.P, C.C..  The face in the corner is Mr A J Pengelley, Chairman of the Looe Harbour Commissioners and skipper of “Our Daddy” 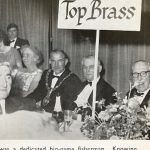 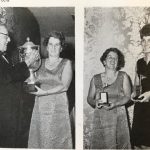 Below from left to right are Sam James, the light tackle expert of the day and a new British Record holder being presented with the Leslie Andrews Light Tackle Trophy and the Venning Trophy for the most outstanding catch of the season. Next is Dick Downes from the Isle of Wight being presented with the SACGB trophy for catching most sharks of 100lbs or over during the season. 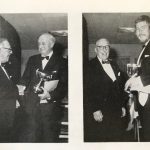