Mike Millman, Vice Chairman opens this newsletter by announcing that the SACGB and Jack Daniels Tennessee Whisky have entered into a sponsorship agreement which guaranteed the club major support for the coming two years. 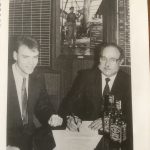 The Sea Angler magazine was previewing the Shark Festival and then was going to print a full colour feature of the event.

The clubs commitment to conservation and tagging had been attractive to Jack Daniels and the comment is made that, “conservation of blue and porbeagle sharks is of vital importance and the fewer fish brought ashore and hung up on a gantry, the more secure the Shark Clubs future will be”.

The club had made tremendous progress in this regard with 508 Blue sharks being returned in 1991, a high percentage of which had been tagged but it was noted that more could be done and it was the responsibility of evert member to help achieve that.

The club was optimistically looking forward to this season. In 1991 the season had started with a 201lb Porbeagle being caught off Padstow by Mr P Scott for which he was awarded the Auger Trophy.

It had started later in Looe with the first  shark not being caught until the 17th June. This was caught by Mr C Ruscoe from Southport and was a Blue of 85.5lbs aboard Ernie Curtis’s boat, Swallow.  By the end of June only 16 sharks had been caught with 8 being weighed and the other 8 tagged and released.

In July the weather improved and so did the sharking with 104 being caught with the nest qualifying fish being 122.5lbs

Early August belonged to the Isle of Wight anglers, Messrs. Vokins and Filipe with Porbeagles of 259 and 204lbs. Shortly after P Mason, fishing off Wave Dancer landed the only Thresher of the season weighing 190lbs. The club congratulated the members from the Isle of Wight area for returning the greater majority of their sharks.

News had also came in of a 214.5lb Porbeagle from the Welsh coast.

September saw the second Jack Daniels Festival and although it was enjoyed by all the sharks didn’t show up. Honours went to Ken Edwards who took the only fish of the competition, caught from Ganesha, skippered by John Reynolds.

The season as a whole had been successful with 599 sharks being caught of which 508 were tagged and released, the balance being brought ashore and weighed.

Tags were now being returned with two from Penzance and 6 from Spain. In support of the tagging programme, in the coming year Jack Daniels were rewarding all who returned tags with a bottle of Jack Daniels Whiskey.

So far this season things had got off to a good start with 18 sharks being caught with 8 being weighed of which 5 were 100lbs and over. In December the previous year a Thresher had been caught by a commercial boat out of Looe which weighed 616lbs which was nearly double the British Record.

The club reported an enquiry from an angler looking for others who would like to join him to fish for porbeagles during the winter.

It was also reported that Mr Fred Dack had passed away. Many members would have remembered him from his days in the tackle shop and latterly with his own tackle repair business