At the committee meeting of 12th November 1968 the secretary advised the meeting that several European members who attended one of the annual dinners had approached him with the suggestion that the Club provide a trophy to be competed for internationally between European Countries. This was proposed by Mr G Nancollas and seconded by Lt Cdr. Horrex and carried unanimously.  At a later committee meeting on the 17th December 1968 the secretary reported the feedback from the European Members when they had been advised of the trophy was that they wished it to be for the best shark over 75lbs caught in British Waters during the season by a member resident in Europe (excluding Great Britain). The winner was also to be awarded a free days fishing in the following year from any Port in Great Britain equivalent to the value of £12 maximum, or the free purchase of goods to this value from any tackle shop advertising the SACGB Newsletter.  This was proposed by Lt. Cdr. J S Horrex and seconded by Brig. Caunter and carried unanimously 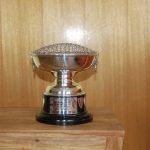