At the committee meeting on the 2nd August 1953 Brigadier J A L Caunter C.B.E., M.C. donated this trophy. His request was that it be a challenge trophy which would be competed for annually by lady club members. It was accepted by the committee and was named The Alan Caunter Trophy 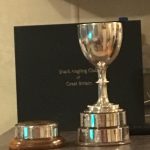